MACEDONIAN DENALI EXPEDITION 2012
Denali, the North American giant is a challenge to many climbers, skiers and mountaineers from all over the world. They say Denali is one of the most difficult mountains, maybe hardest one from all seven summits just because there is no logistics in the most cruel nature conditions. 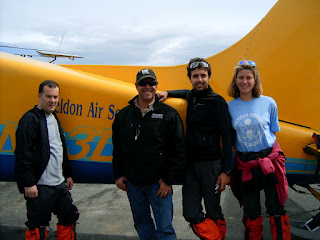 The mountain is beautiful, the route was not so seriously demanding compared to our previous experience and ascents, still the specific Alascan cruel weather conditions with unpredictable forecast, make this mountain so difficult to reach. The white beauty is magical but gave us some hard time to deal with it.  Here are some extracts of my personal diary during the Denali climb.
08.06.2012 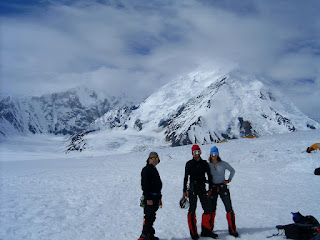 With tears in my eyes I have to announce that I am seriously thinking of backing out. When you think about it it’s not such a big deal, the mountain will be there when I come back next time.  It’s just that this almost never happened to me before to walk away with no summit. Usually I am the one always lucky with the weather, believing that the mountains like meJ. It seems like nobody can reach the summit in such weather conditions.
I remember that middle aged Russian woman with no crampons, no harness, no rope, dressed in light down clothing, saying: It’s nothing complicated, just take it easy and you’ll be on the summit.  We met her on 3rd of June on the way from Camp 3 to Camp 4.  We heard that 2nd of June was a successful summit day with several good days in a raw, when many people summited. 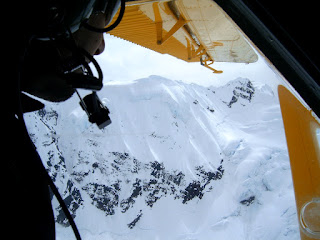 When we arrived on Camp 4 (4350m) we found a bunch of people waiting for the next window to go up.  We also saw many people coming down from C-5 where they have been stuck for days, not being able to step out of their tents because of strong winds and snow storm.  So many people, individual groups, national teams, guided groups, even famous athletes are now waiting a new window to go up.  Many already go back since they have spent all of their food, gas or time limit to their booked flight home.
Yesterday (7th of June) it was sunny at C-4. We climbed up to 5100m almost 17000ft for the second time so far. The weather changed quickly. New snow and cold wind blew into our noses. I could smell  frozen blood taste inside my nose.
The snow is heavy and not stable. We see avalanches everywhere around us.  The crevasses  are opening and seem scary.
Every day we see crazy local mountain athletes doing amazingly courageous things around. They ski down the steep hills around c-4 on 14000-15000ft altitude. They are jumping over the crevasses pulling down avalanches themselves. But still, even they are far from the summit.
It is amazing what a different approach level these people have compared to the mountaineering schools and clubs we see in our region around Macedonia. It is really a great opportunity to learn if you stick around those people who will gladly share their experiences.
….. 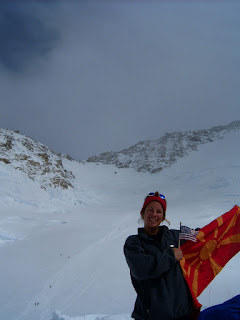 Well, ok , we still have some food, gas and days left until our flight back. We decide we’ll wait a couple of days more and hopefully if the weather allows we’ll move up. It’s just that waiting here on 14000ft doesn’t really help you recover.  I feel the cold in my bones, knees, hips, lower back, and teeth. This is a beautiful but biting nature.
Real cruel beauty of the Alaskan giant – McKinley.
The eternal white nights are something new for us, affecting our sleep.  We recall  the movie “Insomnia” with Al Pacino. Still, no sleep or no dissent meal is not crucial in this situation. What is crucial for the body are a lot of fluids, for the head – good acclimatization and crucial for final success on this place is some luck and good weather.
Whatever happens this will be remembered as a first Denali team from the new era and the history of Republic of Macedonia, and definitely first Macedonian female attempt on Denali.  This project was supported by the Federation of Mountain Sports of Macedonia and sponsored by the US Embassy of RM, municipality of Karposh. We are grateful to everyone who believes in us and supports us in different way.  We believe we’ll have other chances and projects to make you proud of. 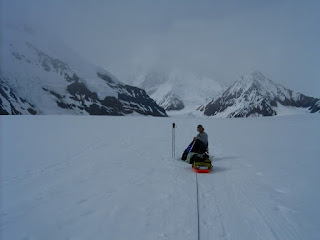 This is one of the exceptional mountains with no logistic support during the climb. Everyone carries a lot of gear, food, gas, tents etc for minimum of 20 days on the glacier. It is organized in big heavy rucksack of around 25kg plus a sledge with another 30-50 kg which you pull again on your back.  It was pretty exhausting carrying such a load until 1400ft.
Still, we felt strong going up the hill up to 5100m. We passed the technical section where you climb on fixed ropes, so we made sure that the route difficulty was not a problem for us. We have climbed higher and more difficult stuff before, but not with so much wind I guess…
It’s snowing again. People are leaving and giving out all of their food, on the other hand you have stubborn ones who are willing to wait more but have nothing left. We help and cooperate when we can by sharing food and water.  Still we have to be careful what we give out when we might need to wait 4-5 days more. 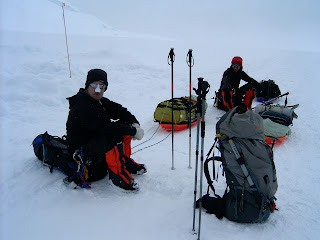 Today is the 8th and our deadline to leave is the 15th of June.  So far Ile is the most optimistic one believing that after this heavy snow spiced up with avalanches, we’d wait for 2 days more when finally the sun will greet us and follow us all the way to the summit.  We are thinking for the option to even try to summit from here. We’ve been up over 5000m two times now so we are well acclimatized to try it in one push.  That is technically possible if you are very strong and fast, but it will be long and tiring day with more than 20h walk up and down.
We’ll see.  So far everyone is waiting, so we’ll wait as well.
The avalanches are becoming more and more serious. Sometimes we don’t see them because of clouded low visibility, so we just hear the powerful noise they make coming closer and closer to our camp. 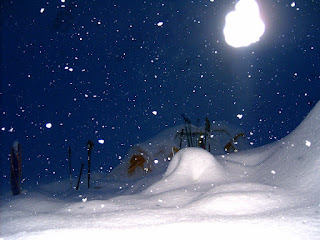 This is our 10th day on the mountain. We start to feel the lack of hygiene and limited commodity, which is normal and as always we are getting used to it.
11.06.2012
13 days in snow. I distinguished that there are two main groups of people coming to this mountain.   The first one are mostly local, crazy ice climbers, skiers and other athletes who are climbing this mountain from all different sides and difficult routes no matter of the conditions.
The second group are the “Seven summit-ers” who need this mountain as the highest one of North American continent.
There are also the guided groups, whose clients are mountain lovers from all around the world.  The difference is that they are lead by the guides who are well experienced and they know every detail of the mountain. 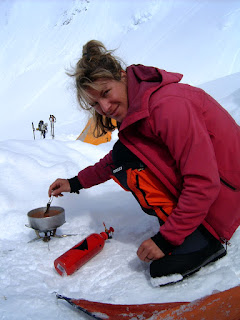 The sun is nice down here in the camp, but when it shines it really burns you, then, when it’s gone those burns can easily turn into frostbites. It looks like a good day today, but everybody waits for the avalanches to pass because of the heat after so much snow. We are thinking to of going up but the rangers say better tomorrow for smaller winds and less risk.
12.06.2012
Another day and night in snow storm. The tent is completely buried under fresh snow.  The forecast was not reliable again. 14 days in the mountain and 9th day above 4300m. Some people did go up yesterday and we could just imagine how this wind looks up there on 5200m. Still, no summit for anyone. Our days are counted. Today latest tomorrow is our last chance to go up!
At noon or more precisely 12:30 we manage to go out of the tent. Everything is buried down under the snow. Even more exciting the avalanche came down to the camp. Really scary. Several guys got hurt. 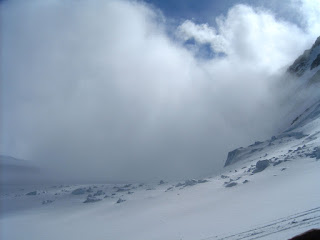 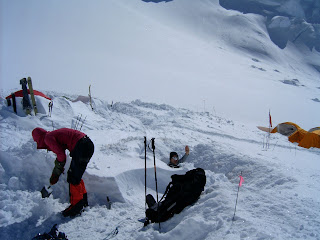 It seems like the forecast is correct but late for a week or so. This was the biggest storm so far which was maybe expected last week. We have about 1m new snow for the last 30 hours.
I think now we’ll wait for good and stable weather just to get down to the Base Camp. In Talkeetna we might think of changing our flights and try again after a couple of days and renewed food reserves.  Or just leave with normal schedule and try again next year.
It’s really strange weather with so much snow in June and no bright window. I was amazed by the Gods of the mountain, still I respect their decision. There are people here trying to reach summit 4-5 years continuously and never had the luck. We’ll see. There is still a little hope. Tomorrow’s another day.  In maximum 4 days from now, when we have our time limit coming, we must make the decision of going down or up.
…..
We wake up another morning after the coldest night so far, with -11C temperature inside the tent.
Many people from the high camp, finally descended back to C-4.  That was the end of the trip for most of the climbers on the mountain. Moving down was also dangerous because of avalanches, so everybody waited for a stable part of the day and as many possible tracks from other people to mark the trail before they start going down.
We finally had to move down as well. We departed in the late afternoon on the 13th and we walked until next morning. 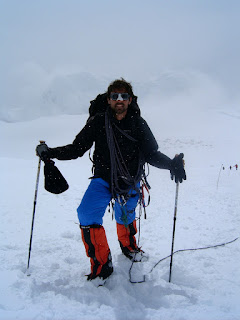 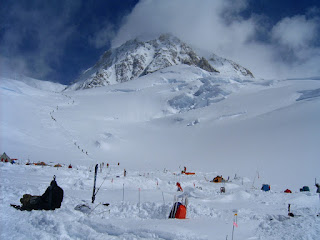 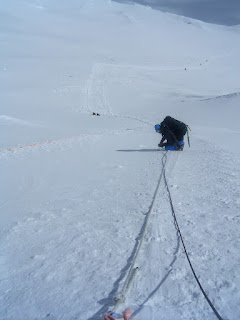 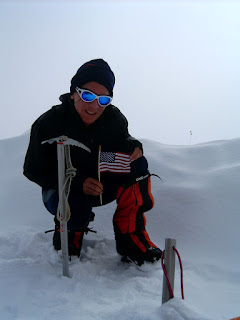 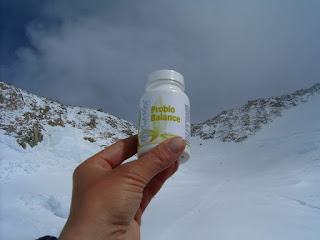 The mountain was more beautiful than ever.  All those sceneries  we missed on the way up, we could notice on the way down. The powerful glacier with all the crevasses and seracs on its texture, all the snow peaks around and the long steep hills before C-3. The lower part of the glacier in early morning pinky mood seemed so peaceful. We thought the mountain maybe opened up just when we came down. The sky seemed to be so still and blue, while the wind and the clouds seemed more and more quiet.  We felt happy for going down, all safe and well.  We were sure we had made the right decision. 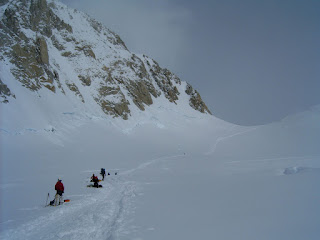 Just then, when the nature looked so friendly a big accident happened and a group of 4 Japanese climbers have left their souls and bodies with the avalanche that has taken them. The fifth one fighting for life, survived with serious injuries.  The bodies still can’t be found. 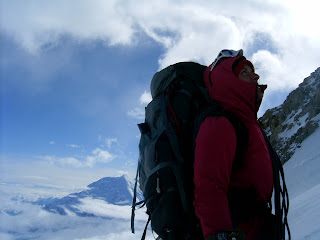 Rest in peace brave souls, victims of one unpredictable moment!
After a total of 16 days in the mountain and 11 above 4300m we came back down to civilization. Richer with the experienced and challenged to try it again, we are going home fulfilled with fresh Alaskan impressions.
This experience will  be very usefully implemented in our next projects and will definitely leave unforgettable memories for each one of us.
We are grateful to the US Embassy Macedonia and municipality of Karposh for making it all happen. The healthy products and food supplement from Calivita and Makfit kept us well all the way.
The report and daily news are made half in English and half in Macedonian language. For more complete story read both versions. 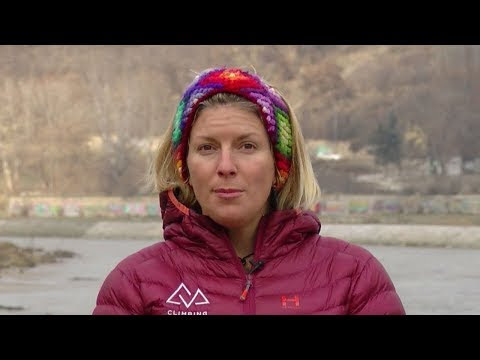 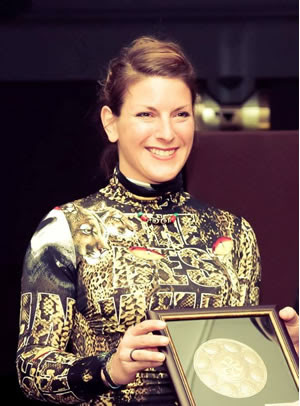 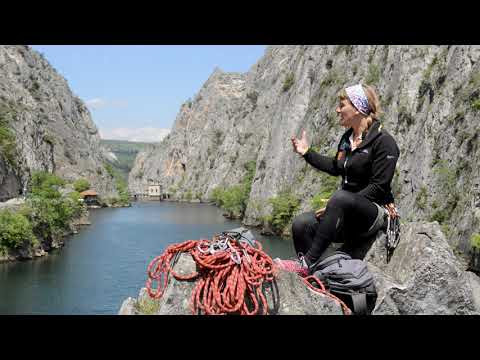