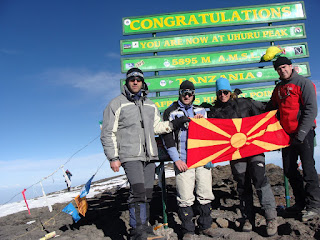 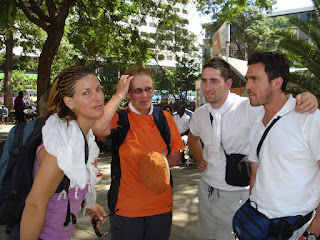 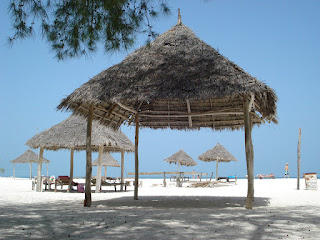 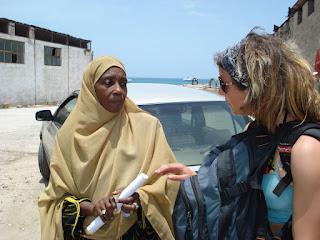 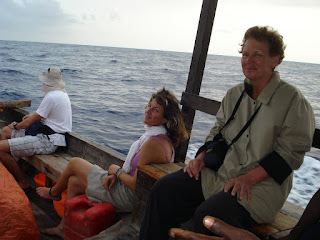 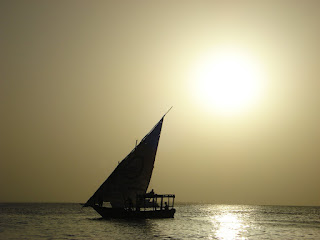 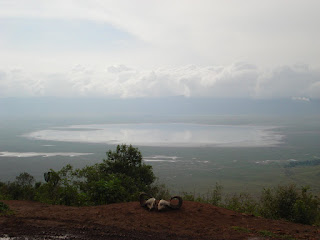 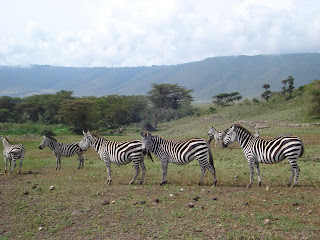 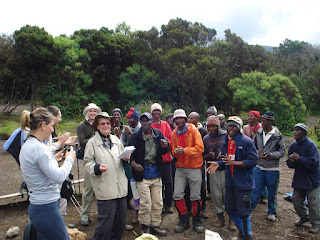 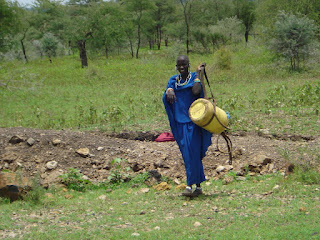 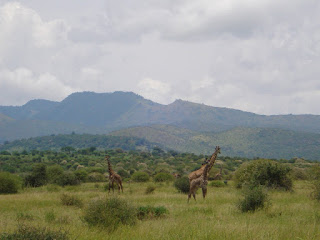 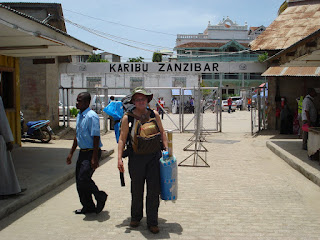 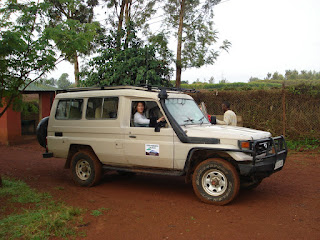 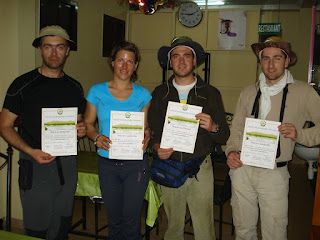 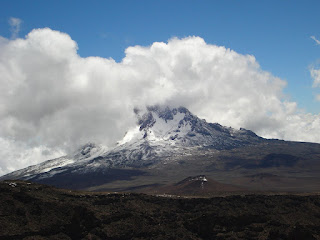 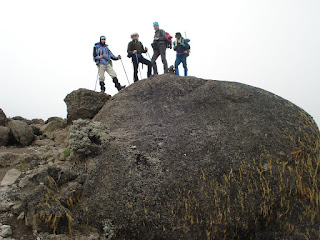 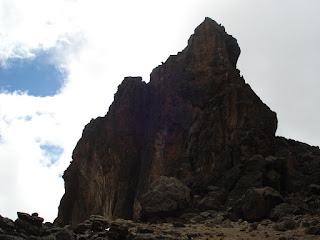 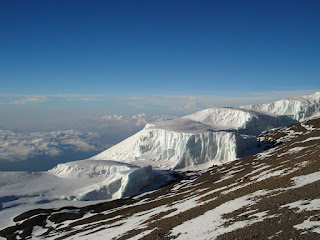 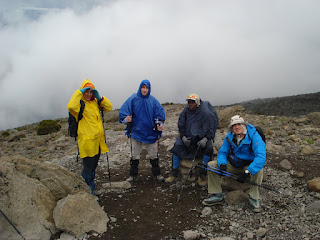 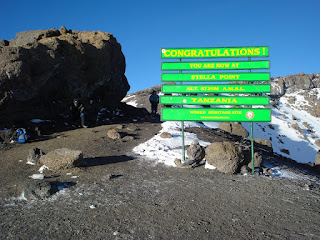 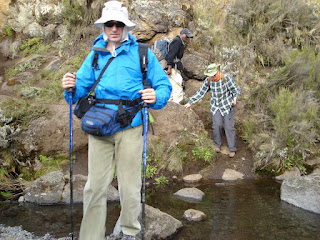 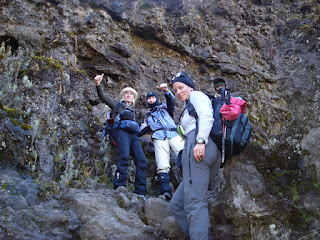 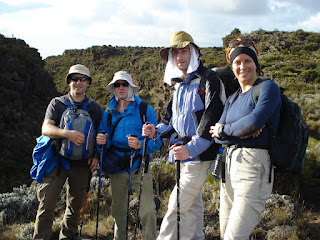 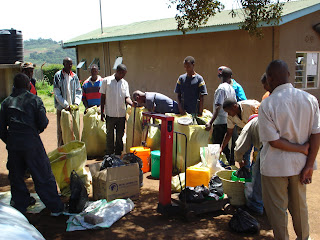 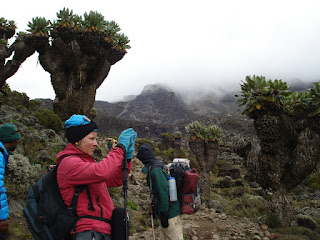 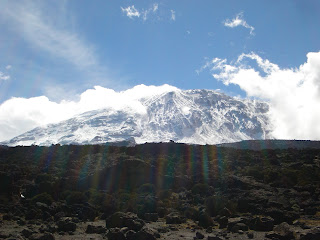 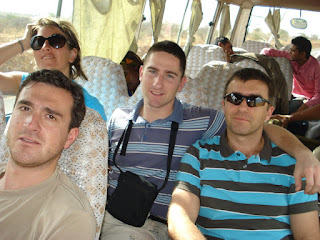 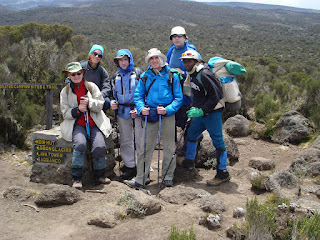 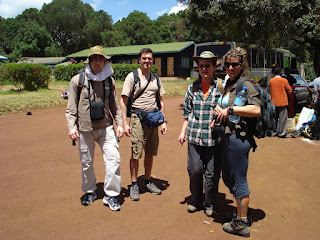 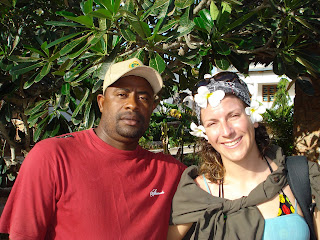 The Kenia -Tanzanian trip held between 27 Feb - 14 March included successful climb of the African highest summit Uhuru peak 5895m, safari trip and Zanzibar white sand relaxation.
All four members: Ilina Arsova, Darko Koljozov, Filip Vasilevski and Stefan Stojanovic stood on the summit of Kilimanjaro 5895m asl. around 7.30am on 4th of March.
Our 65 years old doctor Dr.Milena Ilievska, probably the oldest Macedonian woman on such a tour, was taking care of everyone's health during the trip. We had the pleasure of her company till the highest base camp - Barafu on 4600m asl.
About the climb:
We took the Shira route as a high success rate option and short ascend period of 5 days or total 6 days with the descend to the Kili national park entrance gate. The logistic service was covered by the local company Lekken trekking and its manager Alex (Ace), who provided some really great crew. Most happy for having the guides: Paul, Roderick, Joackim and the cook Sebastian with us all the time. For most of us this was the first time in an organized base camps, food in mass tent, packed lunch etc. We even had the pleasure of having a bad-y/(sleeping bag-y:) tea on our first day on the mountain.
The route took about 7h average daily climb on small paths surrounded with remarkable scenery. The first part is passed on vehicle that makes a difference from the other Kili routes. The walking part starts just below 3000m which is quite a lot for the first day. The altitude was growing fast though, and I think everybody could feel a lack of extra day for better acclimatization.
The Shira route was more than pleasant presenting us all different landscapes the volcano could create.
From mystic dry Shira camp 1,2 towards the mighty Baranko wall. Approaching the lava tower and followed by numerous ups-and-downs crossing the Karanga river ending up with the final ascent to the Barafu camp on 4600m. After a short break right at midnight the route brings us up a steep path. Do not underestimate this part cause it can be really tiring in the middle of the night in combination with the thin oxygen and negative temperatures. We were welcoming the sun just below Stella point at 5739m and finalizing with the last 1h walk to the picturesque Uhuru peak 5985m, surrounded with the famous glacier leftovers. Going down the same day all the way to Mweka hut 3100m was quite a long day, still the nature which in this part is getting greener and greener kept us in a great mood. A part of the greenish rain forest took us down to Mweka gate at 1700m the following day, where everybody received a diploma for climbing the Uhuru peak, highest African summit and highest self standing mountain of the world.
6th of March we could say that our Kilimanjaro expedition ended up successful and after a good rest and long shower we were ready for the next adventure.
Wild life safari game drive:
We took a two days safari game drive, and we were lucky to see all the animals even though some of them from far distance.
The first day was spent around lake Maniara, and the night we stayed in Kubu camp site. We saw the giraffes and some monkeys looking forward to the following day adventure. The second day we had 8h game drive in a so called Ngoro Ngoro crater full of animals. There we could see some zebras, gnu antelopes, hyenas, flamingos, different birds and the "big five": elephant, lion, hippo and buffalo. We only missed the leopard who was not around at the time.
Zanzibar white sand:
Another couple of days were dedicated to the Indian ocean vacation. We traveled by bus to the capital of Tanzania, Dar el Salaam from where we took the ferry to Zanzibar. After circling around the island we stayed 3 days on the north where we found the nicest white sand beach.
Vacation is not a vacation without some activities and adventures, so we decided to try what the island offers. One day snorkeling with plenty of fish, dolphins and turquoise water. Another day visiting local fishing villages, markets and having the pleasure to swim with the giant turtles.
We even checked out the famous Zanzibar's full moon party spiced up with cocktails and night swim. Still, I guess everyone will agree that best of all were the everyday's long sunset swims.
The journey continues towards the inland again. This time with an old sailboat. It took us about 8h instead of promised 4h to get to the small town Tanga, near the Kenian -Tanzanian border. From there a long bus drive, passing Mombasa and back to Nairobi. In Nairobi we have a day for rest and sightseeing and right on midnight - the magic is gone. We have a plain to catch.
We go home, that's all folks!